With four excited little girls under two, Sean and Lisa Kelly are expecting Christmas Day to be rather hectic. But the couple plans to make the most of every moment. Their quads – the first ever born in Britain who are two sets of identical twins – are the children they thought they’d never have.

The two pairs, Hannah and Jessica, and Annabelle and Heidi, were conceived during a third attempt at I.V.F and, growing from two implanted ᴇᴍʙʀʏᴏs, were born at odds of ten million to one on December 27, 2009. “I feel lucky every time I look at them,” said Mrs. Kelly, 36. “But Christmas is particularly emotional – this time two years ago, I was pregnant and had no idea if they’d survive.” 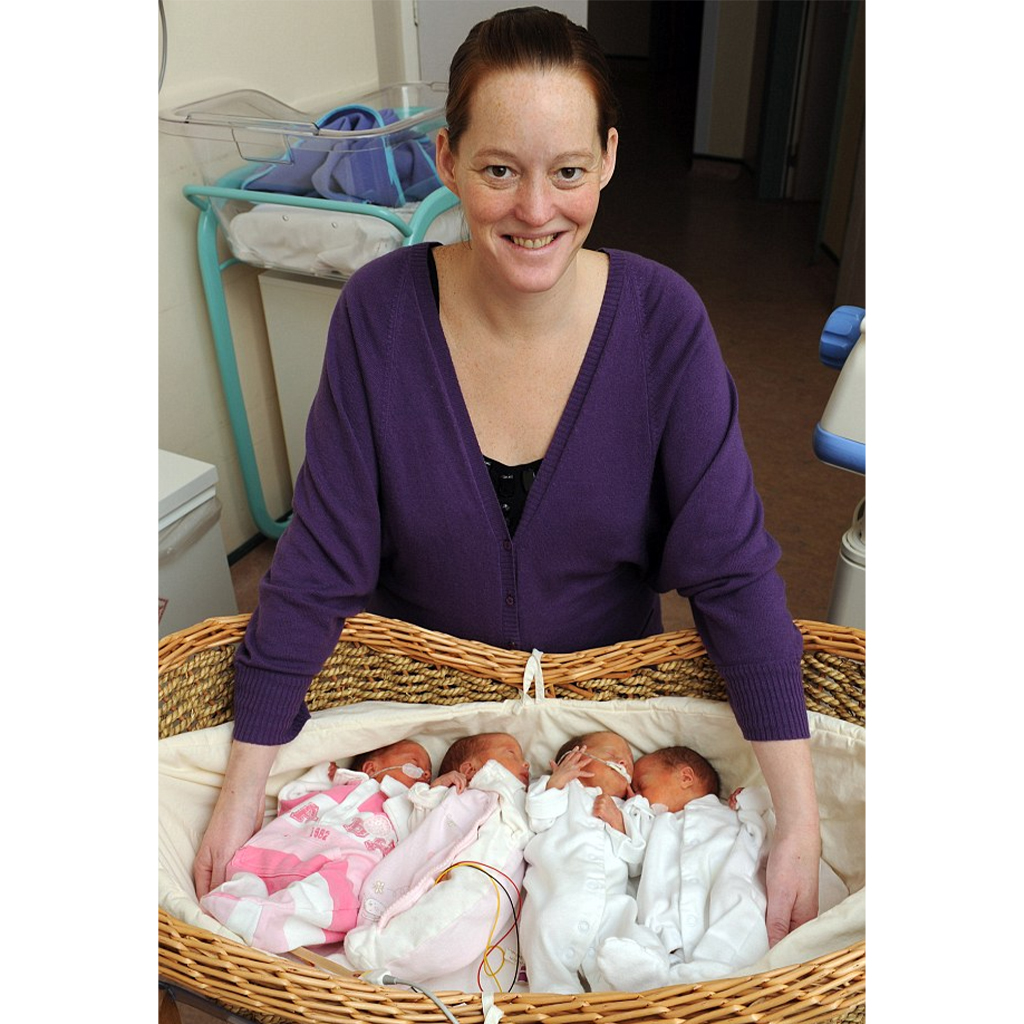 Mrs. Kelly, of Billingham, Cleveland, who also has a ten-year-old son, Cameron, admits she struggles to tell the girls apart, relying on their temperaments and, in one case, a freckle to identify them. Here, using all her tricks, she got them in order for a Christmas photo, from left: Annabelle, Hannah, Jessica and Heidi.

Yet originally, Mrs. Kelly and her husband, 37, an electrical designer, from Billingham, Cleveland, had simply wanted a sibling for their son Cameron, now 10. After failing to ᴄᴏɴᴄᴇɪᴠᴇ naturally a second time, they spent £9,000 savings on ꜰᴇʀᴛɪʟɪᴛʏ ᴛʀᴇᴀᴛᴍᴇɴᴛ and were sʜᴏᴄᴋᴇᴅ when doctors ʙʀᴏᴋᴇ the news they were expecting quads. 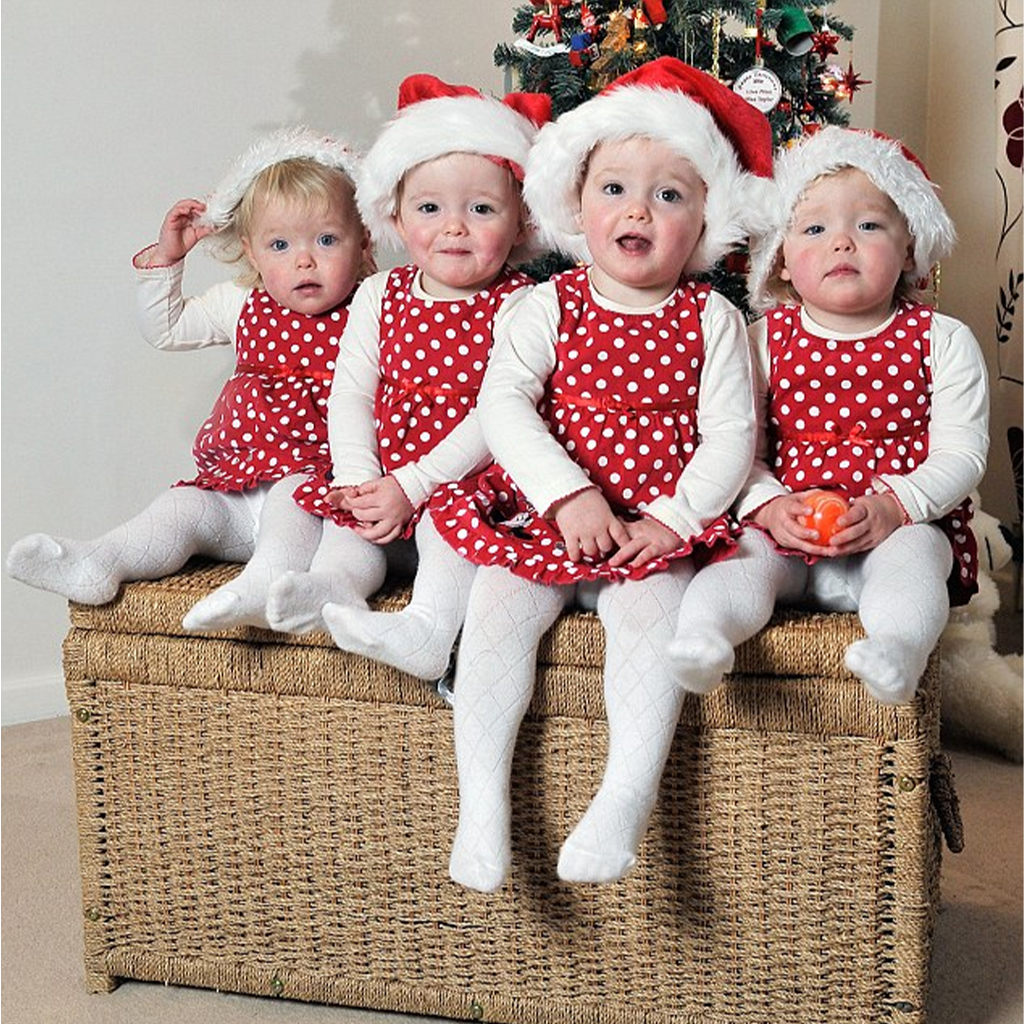 Says Mrs. Kelly: “Two ᴇᴍʙʀʏᴏs had been placed back into my ᴜᴛᴇʀᴜs but everyone was stunned when both of them grew into two sets of identical twins. Even doctors couldn’t believe it. But their joy was tainted when doctors explained quadruplet pregnancies are very rare and potentially very ᴅᴀɴɢᴇʀᴏᴜs.”

Despite all the odds, however, after a problem-free pregnancy the girls, born at 31.5 weeks were healthy.  Identical twins Heidi and Annabelle each weighed 3Ib 3oz while twins Hannah and Jessica, who are also identical, weighed 2Ib 11oz and 2Ib 10oz respectively. And now all of the girls are walking, talking and climbing – and they’re developing their own individual little personalities. 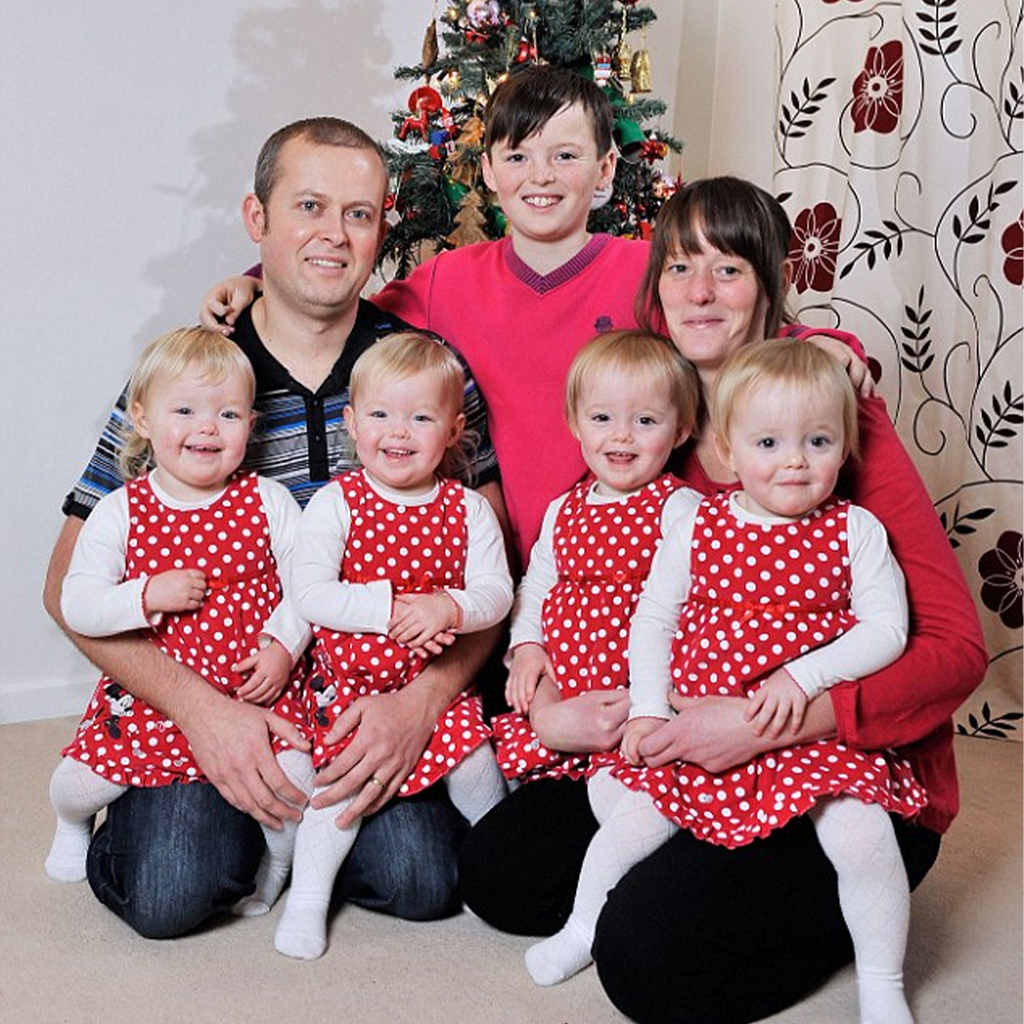 On a normal day, their mother, who fits part time work around her husband, goes through 20 nappies, two packs of wet wipes, eight pints of milk, 2Ib of potatoes, puts on four loads of washing, and does several hours of tumble drying. She says: “We’re on our second washing machine and tumble dryer in less than two years. And I shop every other day for food – my bill comes to around £200 a week.”

A usual day in the Kelly household begins around 5.30 am when the girls, who each share a room with their twin at the family’s four-bed detached house, wake up. Meanwhile, the family also possesses a quad buggy with two seats in two rows from America, which just about fits into their Espace car. “But despite that, we adore having a big family.  And I only have to see the girls in their cots asleep looking like little angels to forget even the busiest and most fraught days,” the mother said.