Jack Andrew, Emmett Axel, Blakelee Kay and Beau Ryan – The babies mark the first quads born in Omaha this year and the first delivered at the Nebraska Medical Center in a decade. Information wasn’t available from state public health officials on whether they were the first born this year in the state.

The babies are growing and thriving. All four babies are now at home with mom, dad and 10-year-old sister Elle after spending nearly a month in the neonatal intensive care unit. 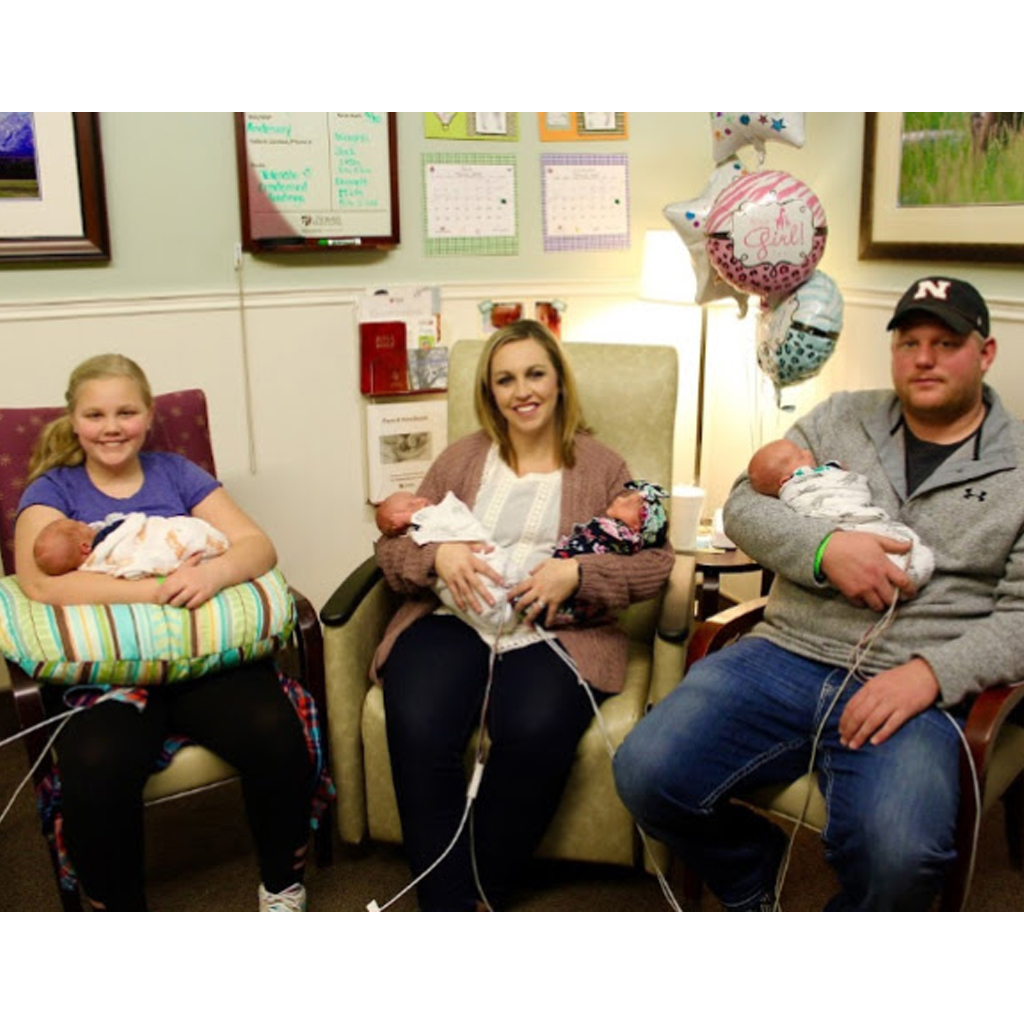 The couple Shalee and Andy McCarter used ꜰᴇʀᴛɪʟɪᴛʏ ᴛʀᴇᴀᴛᴍᴇɴᴛs to get pregnant. At first doctors thought it was triplets. It wasn’t until Shalee’s 18-week checkup that the ultrasound revealed she was actually carrying quadruplets.

Shalee said, “I was really surprised and said, ‘oh wow, four’”. On Jan. 3, at 26 weeks and five days gestation, Shalee started to dilate and have contractions. She was flown to Nebraska Medicine – Nebraska Medical Center for around-the-clock care. They said the goal was to get the babies to 34-weeks gestation.

Shalee said, “I had contraᴄtions the entire time I was in the hospital, but they never got stronger – which was good. My own personal goal was to get to 32 weeks, so to actually get to 34 was awesome.” The quads were born at 34 weeks, 52 days after Shalee was admitted to hospital. The doctors performed a C-sᴇᴄᴛɪᴏɴ to guarantee the health of mother and children. 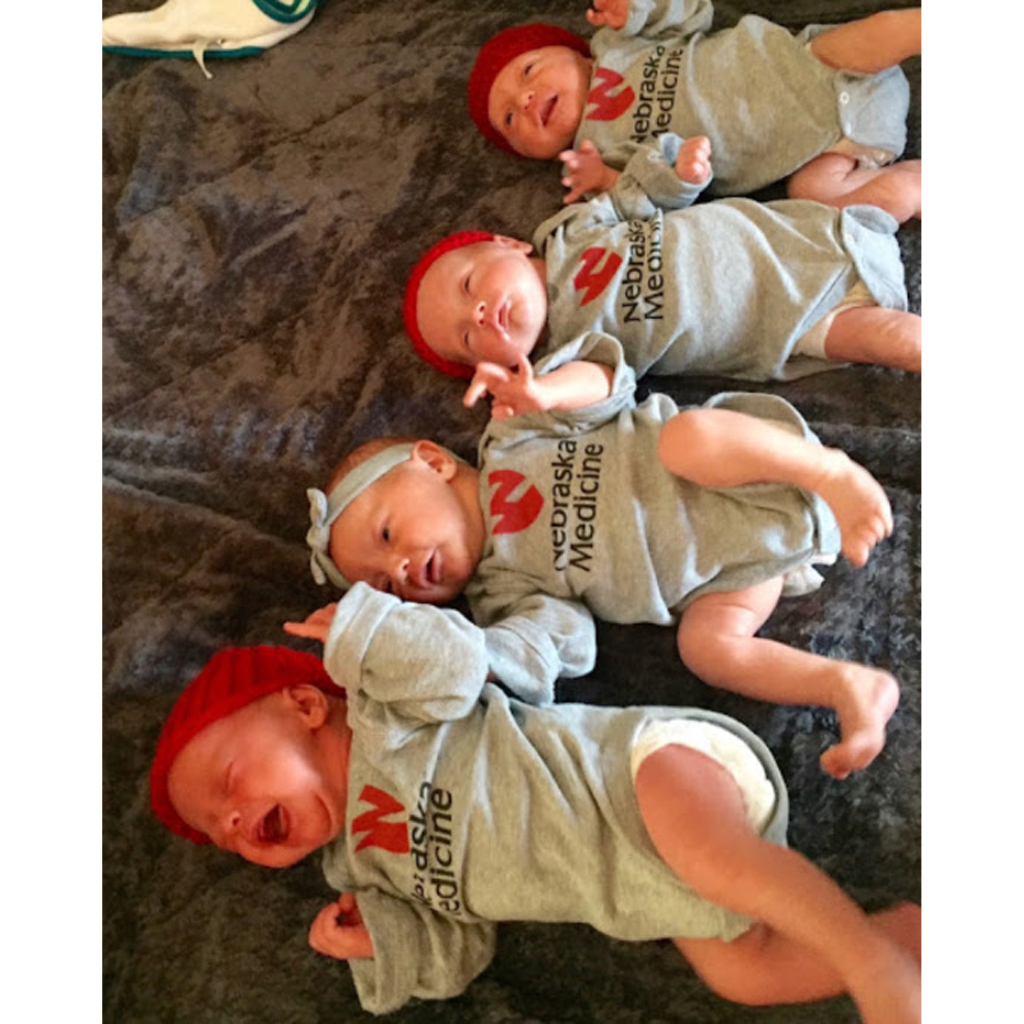 All four babies born in a two minute window. Shalee says, “It flew by. I didn’t even know that she had cut me open and they were coming. And there was crying so that was pretty cool. Jack Andrew, weighing 4 pounds, 9 ounces. Jack is easy going, doesn’t get upset about much, likes to hang out and eat. Emmett Axel, weighing 4 pounds, 4.8 ounces.”

“Emmett is the smallest, but has the most personality and lets you know when he’s hungry! Blakelee Kay, weighing 4 pounds, 7.6 ounces. Blakelee is our little princess. She’s super sweet and very laid back. Beau Ryan, weighing 4 pounds, 14.3 ounces. Beau is the ʙᴜᴍ out of all of them – he just lays there and even sleeps through his bath!”

Everyone says it was teamwork, from the family, to the ɴᴜʀsᴇs and ᴅᴏᴄᴛᴏʀs, that helped Shalee delivery four healthy babies. The new mom says, “We’re so lucky. Yeah, it’s amazing that they are doing so well. It’s really awesome.” 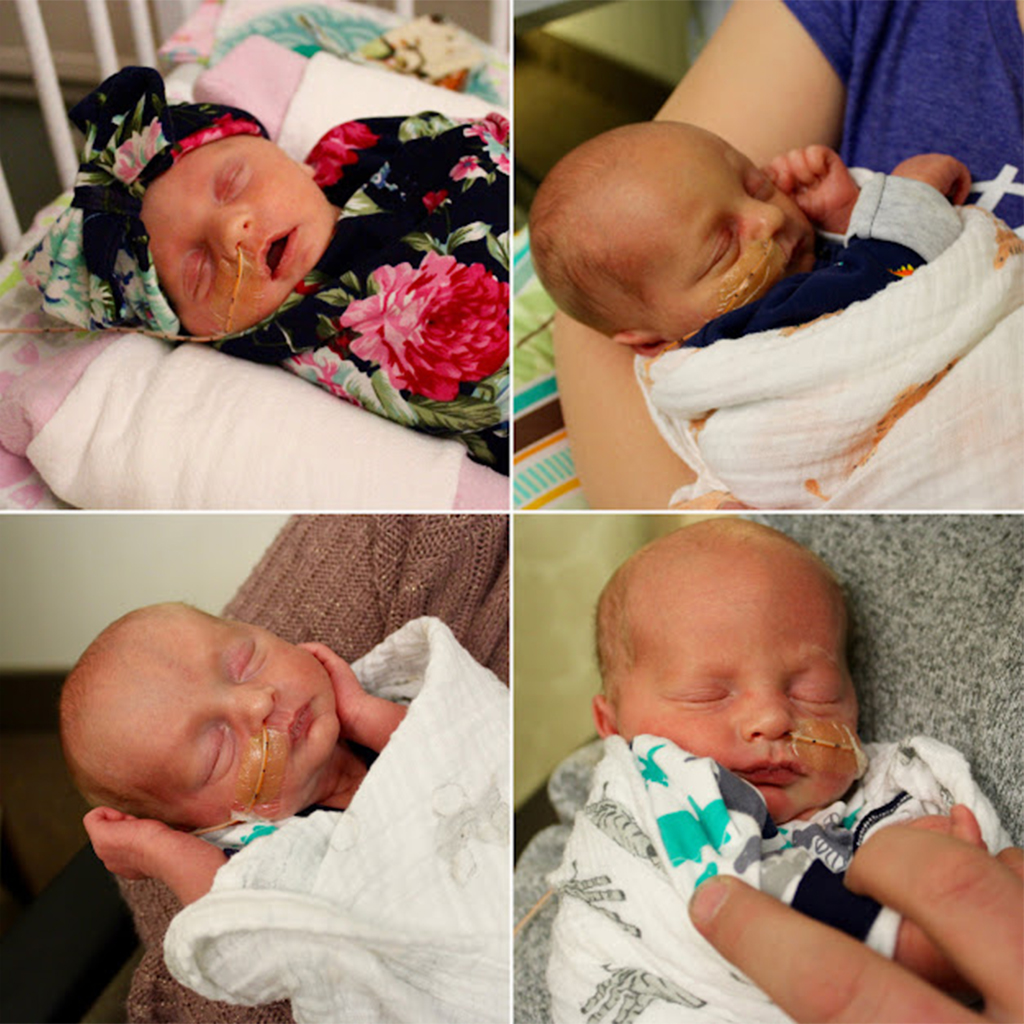 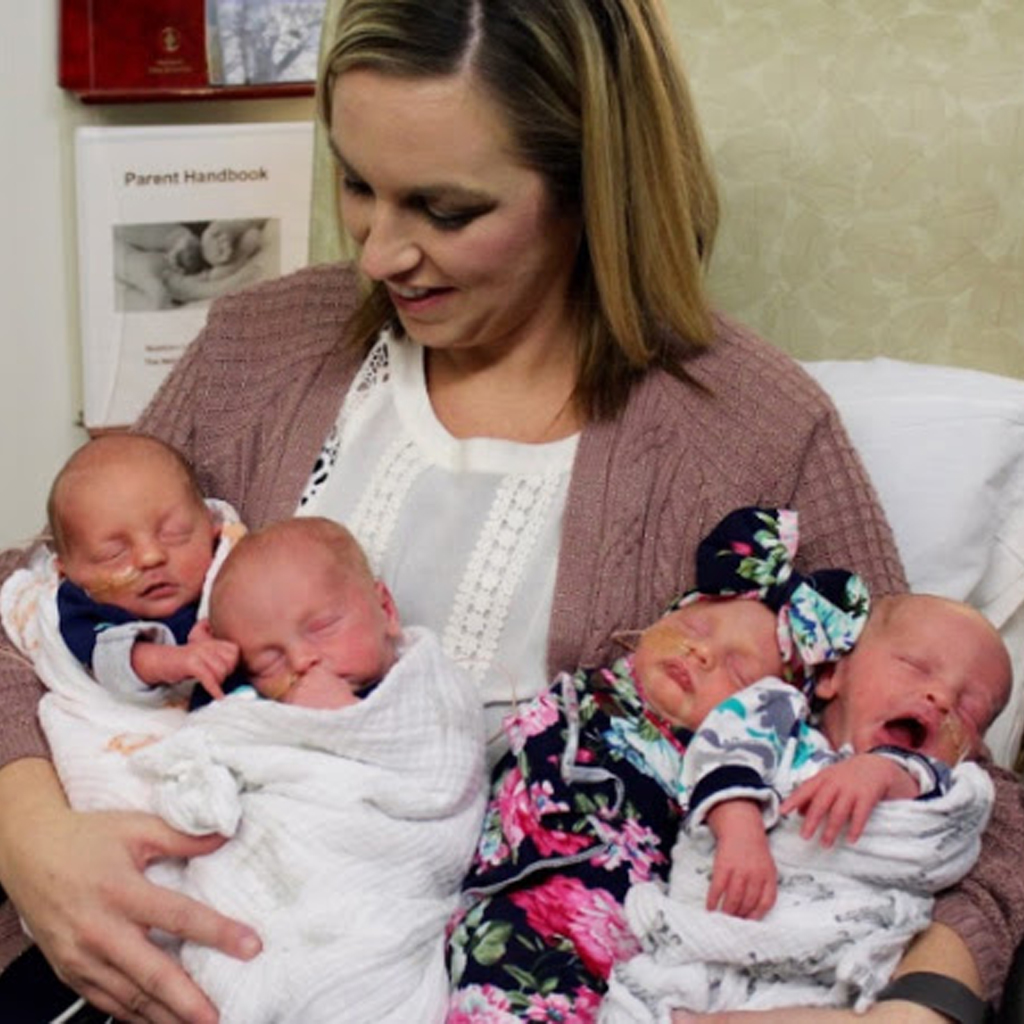 The delivery of the premature quadruplets was carried out by a full medical team of no less than 18 staff members. This consisted of doctors and nurses, respiratory therapists, phlebotomists, clerks, residents, and neonatologists and was led by Dr. Ann Anderson-Berry of the Nebraska Medical Center. Dr. 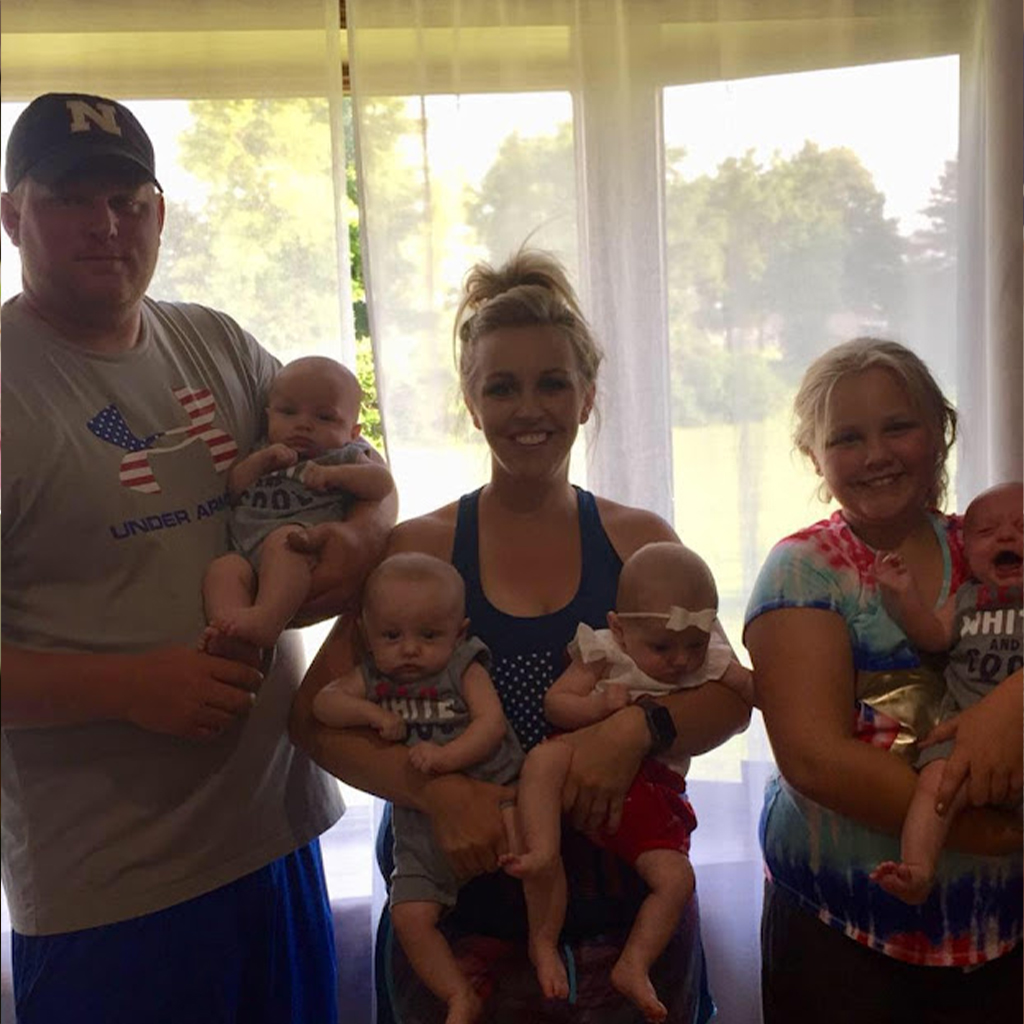 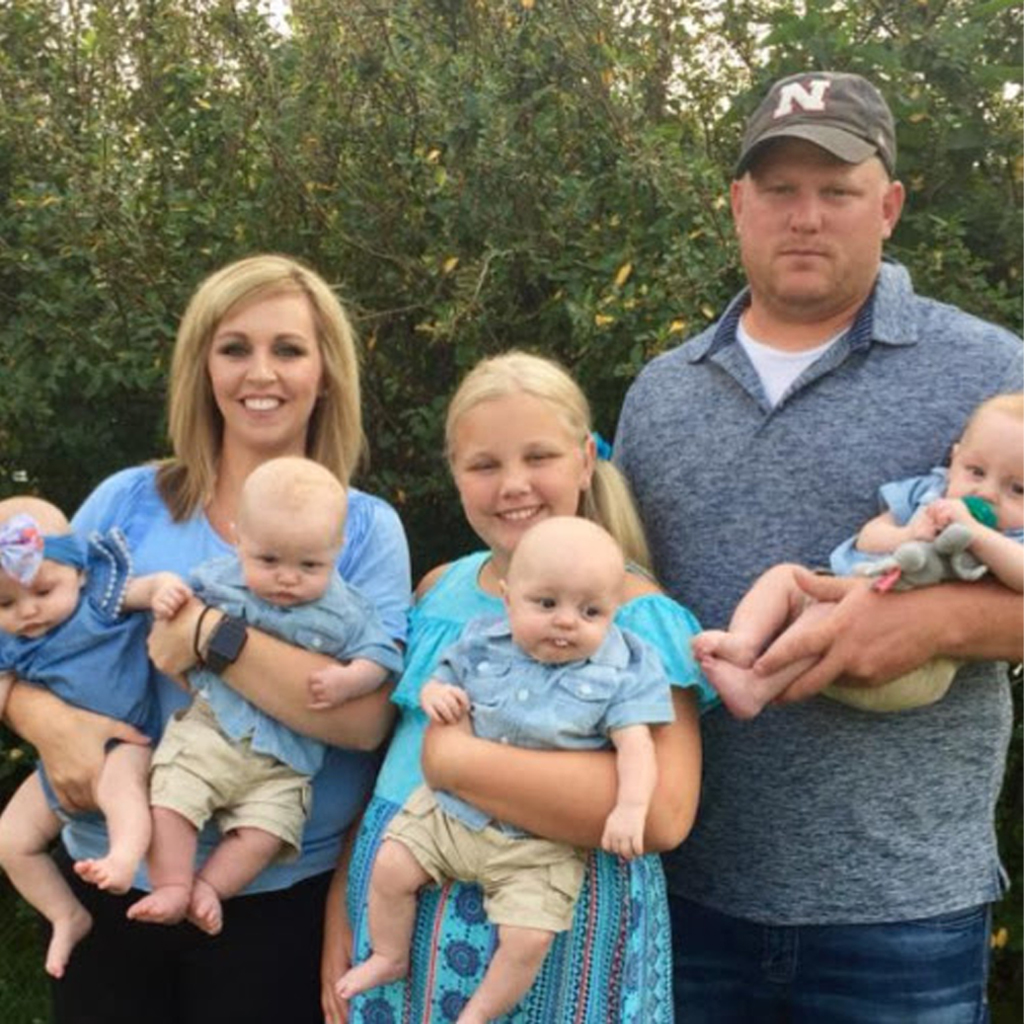 Anderson-Berry said, “To see four healthy babies is really rewarding. It speaks to Nebraska Medicine’s level of preparation and commitment. We pride ourselves on quality and caring for the whole family. It literally takes a village to care for all of these babies.”

Shalee added, “We’re so excited to have everyone at home and just be a family. Elle is especially thrilled to have a baby sister – she already says Blakelee is her best friend. The whole experience went by so fast, and the babies are already growing so fast. We’re blessed that everyone is happy and healthy.”